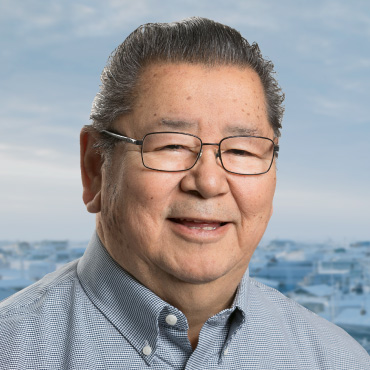 Oliver Leavitt has served in many leadership positions across the state of Alaska, and particularly on the North Slope. In 1970, he was elected treasurer of the Arctic Slope Native Association and served in that capacity for twenty-four years. He also served as a board member for the Alaska Federation of Natives from 1971 to 1999, and served as co-chairman from 1985 to 1986. His political career began in 1972, when Oliver was elected as the first president of the North Slope Borough Assembly. He held that position for four years and then continued to serve on the Assembly for more than twenty years after. During his decades-long tenure in North Slope leadership, Oliver was a member of Alaska’s Local Boundary Commission and the U.S. Arctic Research Commission, as well as being a founding director of the First Alaskans Institute.

Oliver was elected to the ASRC board of directors upon the corporation’s inception, serving as treasurer from 1972 until 1983 and later as chairman. He also served as Vice President of Lands and Vice President of Government Affairs. Locally, Oliver is known for his commitment to the community as a whaling boat builder and whaling captain. He’s also involved in Barrow’s local Search and Rescue and the Barrow Whaling Captain’s Association.

Oliver is married to Annie Hopson Leavitt, and together they have three children and three grandchildren.