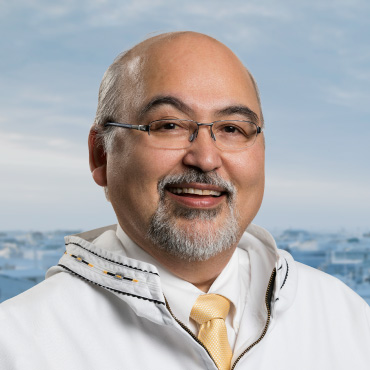 Rex Allen Rock Sr. is the president and chief executive officer of Arctic Slope Regional Corporation and oversees all aspects of ASRC’s business operations. In this role, he also helps to foster a productive relationship with the board of directors and the corporation’s approximately 13,000 Iñupiat shareholders.

Rock has served on the ASRC board of directors since 1993. His board service includes work on various committees, to include: Executive, Audit, 401(k) Trustees, Shareholder Hire, Compensation, Investment and Heirship. He was elected to the position of chairman of the board in 2004, following his service as vice-chairman and 1st vice-president.

Rock previously served as president and CEO of Tikigaq Corporation, and was responsible for the overall strategic guidance and vision for the village corporation. Under his leadership, the corporation started an educational scholarship program for youth that assists current as well as future generations.

Rock served in many capacities for his hometown, including as whaling captain and head coach for the Tikigaq High School boys’ varsity basketball team – a position he held for more than 20 years. During that time, his team won four state championships. He was elected Coach of the Year numerous times by his peers, most currently in 2009 for his tireless dedication to Point Hope’s basketball program. Rock was inducted into the Alaska Sports Hall of Fame in August 2015.

A graduate of Tikigaq High School, Rock went on to attend college at the University of Alaska Fairbanks.

Currently, he sits on the St. Thomas Episcopal Church Council as well as the Local School Advisory Council.

Grounded in his Christian faith, Rock is honored to have married his best friend, Ramona, 30 years ago. They have four children together and are blessed with three grandchildren.