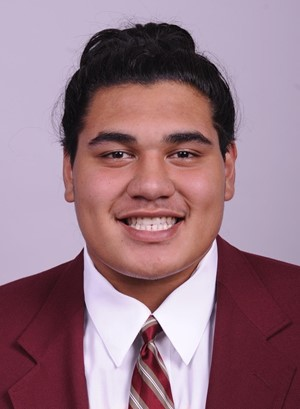 Brandon Pili has never been shy about his NFL goals. Playing for the NFL is something he’s aspired to since he was a kid.

Currently in his second year as a defensive lineman for the University of Southern California (USC), Pili continues to put in the work to make his NFL dream a reality.

Raised in Utqiaġvik and then Anchorage, Pili has been playing football since the third grade. He played for Dimond High School’s varsity football team before moving to Beaverton, Ore., to play for Westview High School his senior year.

Pili understood that if he stayed in Alaska, he wouldn’t garner as much attention as other kids in the Lower 48.

“My dad pushed me to make the move, because he knew I had the potential to make it to the next level,” says Pili. “I didn’t want to at first, but I finally agreed.”

He received his first Division 1 college offer from Oregon State after his first game at Westview.

When Pili ultimately committed to USC, he says it was like “a dream come true.”

Playing at the Division 1 level in college has been an adjustment from Pili’s high school days.

“Everyone I go against is either the same size or bigger than me, and in Alaska I was usually the biggest one.”

That doesn’t intimidate Pili, though. “My parents have always pushed me and my siblings to do our best…Their support and encouragement have been my backbone over the years.”

Being away from his home in Alaska, Pili misses the outdoor activities and the long summer nights, when the sun didn’t set until well after midnight. He also misses his family and friends.

But he still gets plenty of love from his home state. “I get a lot of support from my family and friends in Barrow and all over Alaska, and it’s a privilege to represent my community and home state.”

For now, Pili is undecided in his major at USC, but hopes to have a long and healthy career in the NFL after graduation.

Pili comes from a diverse background. He is Iñupiat and Samoan, and is very proud of his heritage.

To Pili, being Iñupiat is “very unique,” and he hopes to one day return to his former home in Utqiaġvik to learn more about the subsistence way of life and to give back to the community.

His Iñupiat name is Nasuk, and his Samoan name is Matimatimaivasa. He is the son of Heather and Billy Pili and the grandson of Randy and Virgie Crosby, from Utqiaġvik. His siblings are Darren, Alissa, Trinity, Kayla, Cayden, Braden, Alyna and Billy Jr.