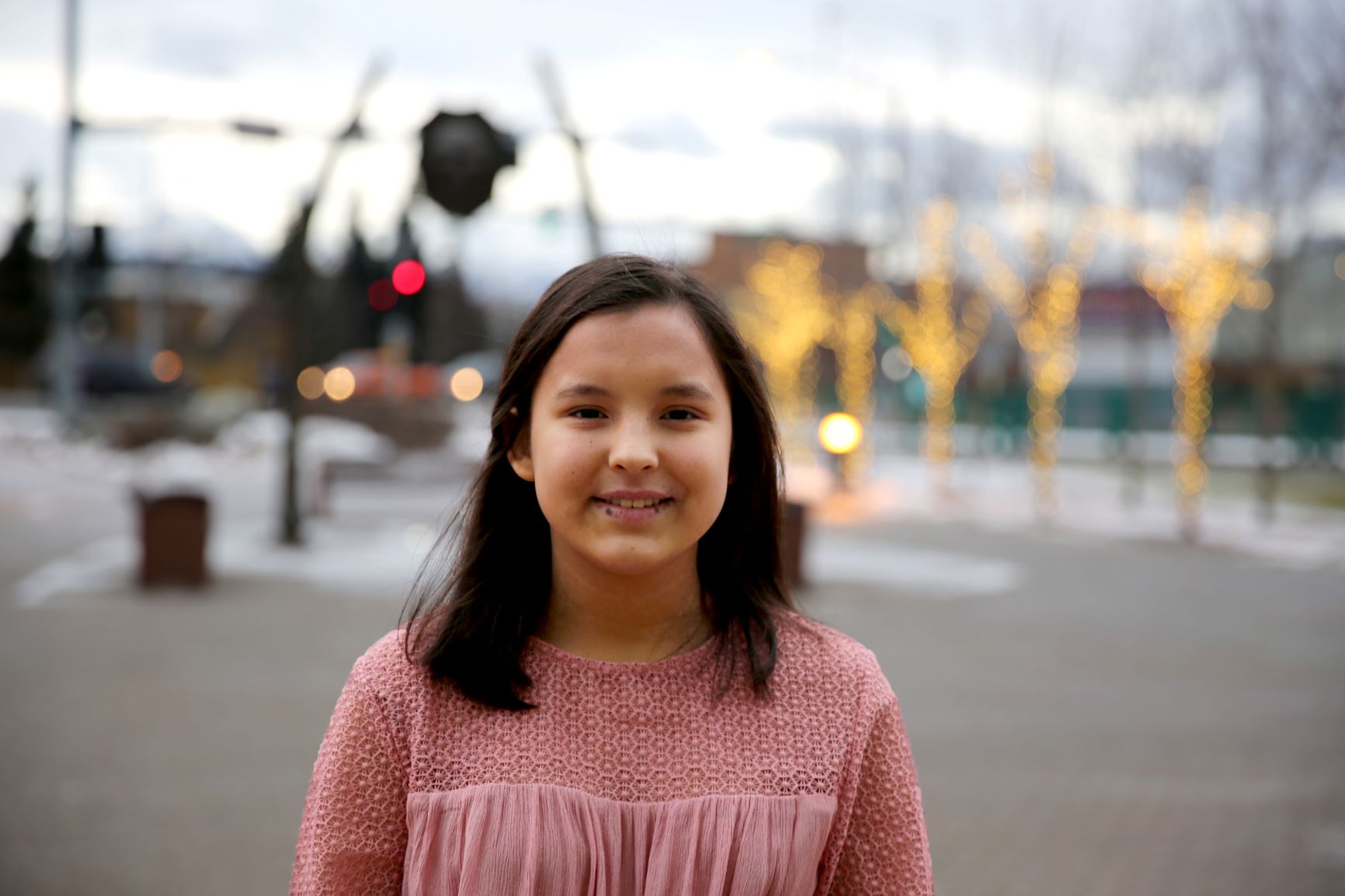 In the fall of 2018 Debra Lane-Hayes began her first semester at University of Alaska Anchorage (UAA) – at just 14 years old.

After graduating from Pacific Northern Academy, located in Anchorage, Lane-Hayes made the decision to attend the Acceleration Academy through the Alaska Native Science and Engineering Program (ANSEP) to pursue her undergraduate degree in biology. She has her sights set on a career in dentistry; whether that be a general dentist, an orthodontist, or an oral surgeon, she’s not sure yet.

What she is sure of, though, is her purpose to help others.

As someone who endured health problems throughout a majority of her life, Lane-Hayes is a positive force with a knack for putting a smile on someone’s face. Until a few years ago, her allergies limited her diet to consist only of wild game, vegetables, and some grains. She has battled with extreme eczema, and when she was in the third grade she contracted alopecia universalis, a condition that causes complete hair loss.

Against these odds, Lane-Hayes has remained optimistic.

“That’s what drives me to help people,” says Lane-Hayes. “I had a positive mindset throughout [my medical issues]…but other people might struggle with it a lot more than I did. So if I can help people in some way then I’d like to do so.”

This extraordinary sense of perseverance has carried over into every aspect of her life, including her academic pursuits. Beginning college classes at 14 sounds intimidating enough, but imagine encountering a syllabus for the first time or being treated the same as a freshman in college when you’re only a freshman in high school. This is the new normal for Lane-Hayes.

“In the beginning it was a little overwhelming. Everything was new to me. I think the reason I’m succeeding is the peer support and staff support there.”

The support and encouragement of her family has also helped Lane-Hayes get her to where she is today. “They’re who support you; they’re your roots,” she says of her family.

Dedicating most of her free time to family, she recalls fond memories of going hunting on the opening day of duck season with her dad and eating her aunt’s caribou soup on frigid visits to Point Hope. To her, family and the Inupiat culture are one in the same.

On top of her rigorous class schedule, she tries to stay in touch with her Inupiaq roots as much as possible. She knows the arts of beading and skin sewing, and has hopes of one day learning the Inupiaq language. The sense of community is one of her favorite parts of the culture.

“It’s part of who I am, and you can’t neglect who you are. I’m grateful to be Inupiaq because it’s something that not a lot of other people in the world can be.”

Her Inupiaq name, Aqugaq, perfectly sums up Lane-Hayes. It roughly translates to ‘the one who steers her own path’. As a self-identified independent thinker, she is steering herself on the path to success. And she believes that ANSEP is a big part of that path.

“I would highly encourage other shareholders and Alaska Natives to take the opportunity to go [to ANSEP], because I know for sure that my life is going to be changed from going there.”

Debra Lane-Hayes is the daughter of Cullen Hayes and Renee Brower; her tribal adoptive mother is Helen Frankson. She is the granddaughter of Janet Lane and Jack Hobson. Her siblings are Orion Jay Lane-Brower and Edison Jones Brower. Her Inupiat family is from Point Hope; she was born and raised in Anchorage.