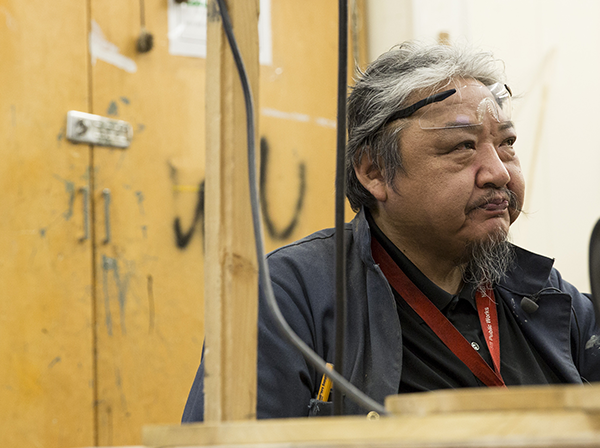 You may know Steve Oomittuk as a dedicated teacher, Point Hope community member, or even the talent in an early ASRC commercial. But what you may not know is his story.

Oomittuk was born in his grandmother’s house in 1962 and raised in Point Hope. From 1972-1980 he lived in Utqiaġvik but for the past 40 years, Tikiġaq has been his home. He taught physical education at the school in Barrow and later was a shop teacher in Point Hope. “I went in to substitute teach for a couple of days but they kept me for seven months,” he said during a recent interview. As a shop teacher, Mr. Oomittuk kept the tradition of making ulus and harpoons alive, teaching the younger generation about how to craft these items and why they are still useful.

Well-versed in the history and culture of the people of his hometown, Mr. Oomittuk is more than willing to share what he knows about everything – from ancient dances to understanding the values of the cycle of life. He served as the city mayor of Point Hope for ten years, retiring from that position in 2014. He has also been mayor and vice president of the tribal council for more than 15 years, as well as a member of the North Slope Borough Assembly.

“I try to make the younger generation understand they have a rich history and a rich culture. It should not be lost,” Oomittuk says. Though he spends less time at the school now, he tries to understand the culture of today’s youth and how to best provide life lessons to this generation. He explains that one of the most important topics in his community is the whale; he believes the bowhead gives itself to the people and that without the animals, a vital element in Point Hope would be lost.

He also stresses respect for the land and the sea – saying it’s crucial for the youth to understand. These days, as the teenagers go whaling with the Elders, he says they sometimes rush the process. Oomittuk describes how when he was growing up, they would be out for a week or two and he loved the adventure. Now, the trips can be much shorter.

The next time you’re in Tikiġaq and wonder about the community’s history or culture, you know who to look to for answers. It’s a safe bet Oomittuk is willing to share what he knows about the village he cares so much about.